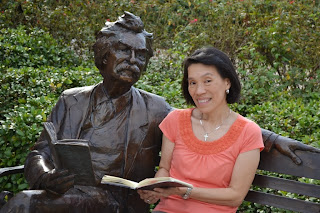 Pansy Gee is the head of the Literary Development Center at Mark Twain Elementary. She teaches grades 3 through 5 of this unique program which she founded for these grades in 1990. She is also a mentor and seminar leader for Rice University Center of Education’s School Literacy and Culture Project (SLC) as well as a supervisor for The Summer Creative Writing Camp with SLC and Writers in the Schools. In 2012, she was awarded Asian Teacher of the Year by the Houston Independent School District. She has two children, Kimberly and Christopher.


What’s your story, Pansy?
I have worked here at Mark Twain Elementary for 26 years this year and I’ve been a teacher for 38 years. I grew up in Houston, born and raised and in fact, I’m an HISD product.  I am what I call a “first generation and a half” Chinese – my mom was actually born here and my dad was born in China but both spent the major part of their childhood in China. So I consider myself first generation – lots of culture, lots of superstitions that I grew up with that I still treasure. Not that I believe it necessarily, but it’s part of my fiber.

I went to a very traditional HISD elementary school and I went to one of the very first integrated middle schools. My mom and dad owned a store in the middle of the Fifth Ward, three blocks from Wheatley High School. I never knew there was a difference between black, white etc, until the 60s when all that turmoil with Dr King and Civil Rights Movement came about and hit me in the face. I remember I was walking home one afternoon by myself because I had stayed late after school. Somebody from a distance, I couldn’t see whose voice, hollered “Your daddy’s a N*****-lover!” It scared the pants off me and I ran home. My Dad had to sit me down and explain things to me. I think I was in 5th or 6th grade and I just didn’t know that there was this conflict.

Of course I was taught that Chinese people are the best, but I think that was just my parents talking!

Houston is where I met and married Don. We met as seniors in high school and I thought, “This gentleman talks too much.” Yes, it’s hard to believe that someone can talk more than me, but I found myself thinking, “I’m going to be very polite and get up and leave”. But then I met him again at the University of Houston and we got to be friends. We dated for seven years before I finally married the man! We have two children – Kimberly went to UT and Christopher went to Texas A&M and it’s been fun ever since! My daughter is now a lawyer at Hess Oil & Gas and my son works as an account manager in Austin for a software company.
Who has been the greatest influence on your life?
Personally, of course, my parents. They always made sure they opened the store on Sunday and it was just a regular working day, but they made sure we went to church. So my Christian faith is also a very big part of what influences me and my ambitions.

Professionally, I have been so blessed to have had so many good teachers. Mrs Smith, my second grade teacher, wasn’t into shaming people. I once changed the grade on a handwriting assignment to make it look better than it was so I wouldn’t have to sit and practice handwriting when I got home. My sister ratted me out and my father, as a consequence, made me go and apologize to my teacher and to my class. He stood outside the door, but my teacher had somehow warned the class in advance. She’d said, “Y’all just make sure that you know that you are going to make a mistake one day and you’ll end up apologizing. So you treat her the way you are going to want to be treated if you were standing there having to do this.” Mrs Smith taught me how to treat children like human beings.

Thinking back, I was a brat in elementary school, I really was, and here at Mark Twain when it evolved that I became the disciplinarian for many years, it was like God’s way of winking at me, saying, “See, I’ll get you!”

Mr Reiner, who became an Associate Superintendent of HISD, was my middle school teacher and he had a big influence on me. He was a speech teacher. He taught Debate and Public Speaking. I had him from 7th grade all the way through to 9th grade. When he ended up being my Principal’s boss, it was just hilarious, just another of God’s winks!

And then Mr Amstutz, the principal of Mark Twain who first allowed me to do this Literary Development Center thing that I’ve been doing for 26 years. He trusted me enough to say, “Just make it your own.” So here I am. LDC is unique to this school and it’s unique to Houston. I can’t tell you how many teachers have been through this school to pick up ideas about the program, about teaching, about literacy. Houston ISD has allowed us to make a language arts lab where we can show that reading, speaking and writing are all combined. Reading is about thinking, not about calling words and being able to regurgitate stories. It’s about thinking and forming opinions and communicating what your opinions are. And it’s about having those opinions valued, even though they might be different from Johnny sitting next to you. We all have to learn how to express those opinions and how to do it well, if we want to be listened to. So that’s what this magnet is all about, that’s why it’s called Literary Development Center. It’s about communication, it’s about thinking and it’s about making sure everybody’s voice can be heard whether it’s in writing or out loud. And it’s about reading really good books! And writing funny stories. Or writing serious stories. Or writing a report. It’s about communicating.

What advice would you give to someone new to teaching literature?
My first piece of advice would be to pick a book or a story that you like. Don’t choose something because it’s on a reading list or you’ve just picked it up, or that you’ve read it but you didn’t find any joy in it. I remember The Snows of Kilimanjaro by Hemingway. Oh my gosh, it was the worst book I have ever read! I had to read it in high school – I would never teach that book because I found no joy in it. I share books that HISD either doesn’t know about or doesn’t care about, and because I haven’t caused too much trouble, I can read whatever I want. So I pick books that I like because in my heart of hearts I believe that if Johnny likes this book then he is going to make an effort to read it.

There are so many great books out there. I want the kids to enjoy that excitement and awe, to be scared and to laugh and be sad and cry because of a book. I want them to feel all that because that is going to make them be readers for life.

How to do you find, or seek to find, balance in your life?
I have to say to myself that it’s ok if the bathroom is not as clean as it might be, or it’s ok if this stack of papers gets left. Or say to the class teacher who is in the room with me, “OK, this one’s yours”. I have to give myself permission to be ok with the fact that I can’t do it all.

My balance is saying to myself, “Not today. Today I’m going to run or walk on the treadmill and plug my little iPod in and listen to music and know that it’s ok. That stack of papers will still be there when I open the door tomorrow and it’s ok.” Especially now when my dad is sick, I have to give myself permission to say to my Principal, Melissa Patin, “I need to go to the hospital and this might not get done today.” And she’s been so wonderful. And it’s ok.

What does Houston mean to you?
I love Houston – I can’t imagine living anywhere else. I love visiting other places, but this is home, it’s family. It’s familiar but it’s big enough that there are still places to explore. My daughter has just recently moved in The Heights. As a little girl, I knew The Heights to be a rundown neighborhood but it’s not anymore, so there’s an adventure there. Houston is big enough to still be an adventure.

Where is your happy place in Houston?
My chair at home – it reclines and it’s in front of the television and it’s got a big lamp behind so I can read, so definitely my chair. And anywhere that’s up high, like the top of the Williams Tower or the tallest bank building in Downtown. Just so I can look out over the city.

Or even driving – I drive east into town, and oh my gosh, the sunsets in the morning!

And of course, my classroom.

What is your favorite restaurant?
OK, you have to be stout of heart – Yuan Ten – it’s in the middle of Chinatown down Bellaire Boulevard. It’s nothing to look at but the food is always fresh and really good. You probably won’t find a lot of lo fans – American white people – most of them are Chinese families or people who pop in at lunchtime because they work in the area. It’s not a very big place so don’t be surprised that somebody will come and share a table with you.

What is your Houston secret?
My Houston secret? That the humidity is good for your skin. It makes you look younger than you are and you are not going to get all dried up. Yes, you are uncomfortable and you have to do laundry often, but the humidity keeps you young, so look on it like that. I said to one of the students the other day that the humidity was a bit much, even for me, “But it keeps my wrinkles hydrated, so I don’t look 104.” And she looked at me as serious as can be and said, “You don’t look 104, you look more… seventy”! She was just trying to be nice, but that’s not what I wanted to hear!

If you could change one thing about Houston…
Traffic! It scares me to death sometimes, but what are you gonna do?


Who would be your own Inspiring Houston Woman?
Linda McNeil who is the Director of the Center for Education at Rice University. Such a high position sounds daunting, doesn’t it, but she is so down to earth and so caring. She opens her home at the drop of a hat, and says, “Oh, you were in the neighborhood? Why didn’t you drop by?” She’s just that kind of warm, wonderful woman, very accepting. She always wants to hear your ideas about education and how to make education better.